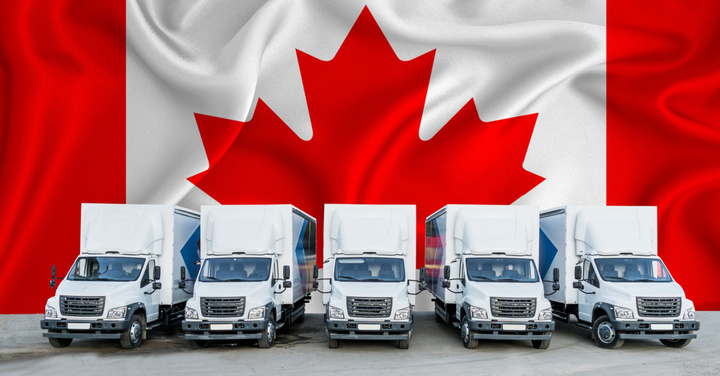 What is Intra-Canada Freight Shipping?

Canada is a vast area covering 3.8 million square miles. Intra-Canada freight shipping, aka shipping within the country, can be as challenging as the country is vast. Canada has two main railways: the Canadian National Railway (CN Rail) and the Canadian Pacific Railway (CP Rail). Both are hugely important to the shipping industry, particularly because of the mammoth size of Canada. The trucking industry equally crucial, mainly because trucks are sometimes the only way to get shipments to extremely remote areas.

Canada is made up of a group of regions, each served by a unique set of intra-Canada LTL carriers:

With such a large land mass to cover, understanding the modes of transportation for goods is unquestionably important to the U.S. shipper.

CN rail connects Eastern Canada’s ports with Western Canada’s ports. It also goes through Chicago and all the way down to New Orleans. CP Rail connects Central Canada to Western Canada. It also connects with parts of the northern and northeastern U.S. Using an array of equipment — grain cars, tanker cars, pulp and paper cars, domestic and international containers — the rail networks move carloads, full container loads, and LTL loads. Selecting the best use of Canadian rail services is crucial for shippers to be successful in Canada.

Unlike the U.S., which has many national LTL carriers, Canada has just one national LTL carrier. Multiple carriers serve the geographic regions in Canada, so U.S. shippers must be cognizant of which carriers cover which areas. Rates, travel times, and service levels all vary and must be considered when setting up your shipment’s transportation.

Like LTL, most truckload carriers focus on specific regions of Canada. U.S. shippers will need to keep that same alertness when choosing which provider has the best rates and service as well as pertinent coverage and capacity. Some companies have refrigerated, bulk, or heavy haul services, and most major truckload carriers provide both domestic and cross-border services. Shippers should be aware that American truckload carriers without proper operating authorization — also known as cabotage — are not permitted to move truckload shipments within Canada.

Like the United States, Canada has rates for various time-specific services on small parcels. But LTL has a different pricing scale. The National Motor Freight Classification (NMFC) system used in the U.S. does not apply in Canada, where LTL rates are based on commodity and density (pounds per cubic foot). Truckload rates are similar to the system in the U.S., with a flat rate or rate per mile used most often. Fuel surcharges also differ in Canada. They vary by mode and whether the freight moves solely within Canada or across the border. The Freight Carriers Association’s fuel surcharge formulas are the industry standard and are published weekly. Larger shippers can negotiate a discount off the published fuel surcharge.

Shipping Costs: What You Should Know About Taxes and Tariffs

No shipper wants to be surprised with hefty taxes or tariffs on a shipment, so it’s best to prepare for those fees that come with shipping to Canada. There are three kinds of taxes in Canada:

Tariffs are duty fees paid on particular imports and exports. Shipments coming into Canada from the United States are subject to a tariff cost calculated based on the country where a product was manufactured, not where it is purchased. The USMCA removed tariffs on Canadian-purchased goods manufactured in the U.S. But if a product includes components made outside of the United States, the Canadian customer must pay tariffs on those components.

Maybe you are just making occasional cross-border shipments or considering Canada as a new source for regular customers. Either way, it doesn’t hurt to have some guidance to make the journey easier and, perhaps, less expensive.

From any U.S. location, FedEx and UPS offer international ground to Canada. While Canadian zones are based on distance from starting place to the destination, the system is much more complicated than the USPS zone system used by FedEx and UPS. If the value for duty is $200 or less, the ground shipping charge includes a routine customs clearance. If duty or taxes are due, the carrier pays them at the time of clearance and will collect them from the receiver upon delivery. DHL Express also offers express service between the U.S. and Canada.

Consolidation could be a vital tool for shippers that have one or more pallets of shipments going to Canada each week. Even though this process will likely add a couple of days to your transit times, it will mean a 10% reduction in shipment cost and one fewer customs clearance fee of approximately $65 per consolidation. It goes like this; The shipper applies a Canadian domestic carrier’s label before palletizing. The carrier will arrange for pick up at a U.S. location, clear the shipment into Canada, and drop it into its closest Canadian hub. The shipment will have a Canadian return address, which is often the carrier’s address. Typically, you will be invoiced in U.S. dollars for the linehaul, clearance, taxes, and shipment charges.

This option has some complexity but makes up for the intricacies with the best savings potential. After consolidating in the U.S., a shipper arranges for an LTL shipment into the carrier’s Canadian hub. Typically, it will be treated as an intra-Canada shipment, meaning shorter zones and invoices in Canadian dollars, which are slightly weaker than U.S. dollars.

Work with a Technology, Data-Driven Partner

Another option is to work with a technology, data-driven 3PL partner, which can provide shippers with many advantages in cross-border shipping:

When entering the complicated worlds of intra-Canada freight shipping and cross-border shipping, having an experienced, tech-savvy partner can save you time and money, as well as relieve some of the burdens for U.S. shippers. That’s where Zengistics can make a difference for you. The Zengistics team has more than 50 years of experience in intra-Canada freight shipping. We know the protocols, tax information, and details required to effectively move intra-Canadian shipments and the varying degrees of change from province to province.

Zengistics is fast becoming one of North America’s premier digital brokerages, specializing in strategizing and executing full truckload, LTL, and intermodal freight. Zengistics, one of the few non-asset brokerages backed by a billion-dollar asset company, ships to all 50 states and Canadian provinces and handles cross-border shipments to and from Canada. Expanding to Canada can make a bigger, wider world for your business. Let Zengistics help you navigate it. Take a test drive with a virtual demo at our website.

Operating on the world’s first collaborative logistics platform, Zengistics is a technology company that executes freight.